A therapist friend of mine who sees young clients ages five through adolescence has described to me the stories heard from parents in her office. They tell her that internet gaming has become a major point of contention in their home. Either their child plays for hours at a time, to the exclusion of other activities or face to face interactions with their friends and family, or the child refuses to stop playing. The child has angry outbursts when asked to pause the game or turn it off. He also loses out on sleep, which makes it challenging to stay alert in school. What started off as a seemingly innocent distraction has taken on a life of its own. And the videogames normalize violence. 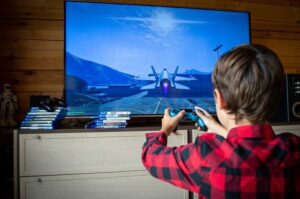 Personal electronics have become babysitter, entertainer, and alarmingly, a potentially addictive force in the lives of young people. Recently, the NPR podcast The Pulse aired an episode called The Road To Diagnosis, which referenced a condition called “Internet Gaming Addiction”.

The DSM-5 TR, which is considered the gold standard for identifying psychological disorders, recognizes Internet Gaming Disorder as a behavior that must cause “significant impairment or distress” in several aspects of a person’s life. Consider the same criteria for other addictive behaviors and substances such as alcohol, drugs, gambling, shopping, and eating disorders. Many people young and old use personal technology for self-soothing; a form of self-medicating to avoid feelings of anger, frustration, depression, and anxiety. Left unaddressed, it can lead to a deterioration of functioning in school, at home and with peers.

Research studies by the California State University found that video games can have a similar effect on children’s brains as drug abuse or alcoholism. A graphic example comes from an episode of Star Trek: The Next Generation called “The Game”. In it, the second in command, Riker, returns from shore leave with a game that he introduces to the crew. It involves wearing a set of virtual reality goggles through which the players use their eyes to place a disc into a cone. The reward is a rush of feel-good chemicals with a reaction that is positively orgasmic. The game then amps up and makes the challenge more intense, and naturally, the reward commensurate. The crew finds themselves eager to encounter the experience to the detriment of their responsibilities. The once ultra-responsible Star Fleet professionals become addicted to the hormonal infusions that come courtesy of a bit of technology. It also renders them violent and paranoid. It turns out that the game was created by an attacking alien species determined to take over The Enterprise. What better way to do so than offering them an initially seemingly harmless piece of entertainment with a more insidious purpose?

Why Internet Gaming Is So Appealing

· It stimulates the pleasure centers of the brain and releases dopamine
· It encourages strategizing
· Just like with gambling, the design of the games is to present random and unpredictable rewards, to keep the person playing, with the hope that they will score a win.
· Creation of a fantasy world from which players choose not to exit.
· Games are high immersion so that sometimes people lose themselves in it.
· It provides a sense of shared purpose among the players as they compete for and against people world-wide.

Consider the model of casino gambling in which there are no windows and no clocks in the room so that the players lose track of time. The bells and whistles and flashing lights enhance the experience, as does the presence of other people, similarly engaged.

Conversely, there are studies that indicate benefits from engagement with games. The National Institutes of Health (NIH) published an article entitled “Does Video Gaming Have Impacts on the Brain: Evidence from a Systematic Review”. The researchers found that some games increase socialization since some are multi-player, they enhance knowledge — as there are games that educate, and many videogames offer a feeling of mastery over a task.

· Looking for alternatives kids will enjoy
· Parental boundary setting, such as setting time for games and other activities
· Cost-benefit analysis, asking the child what they get out of the games and what it costs them as a result of playing.
· Addiction-Recovery approach that addresses the nature of how people get hooked on games.
· Individual and/or family counseling sessions. This article entitled “How to Treat your Child’s Video Game Addiction” has an extensive list of ideas for helping your child reclaim their independence from games.

There are teachers in spiritual traditions around the globe working to make our planet a better place. They are working to increase tolerance and understanding and promote peace, prosperity and personal growth. Yet, spiritual teachers are human and bound to make mistakes. buff.ly/36wvJoN
… See MoreSee Less

With the onslaught of media attention going toward the #metoo movement, it begs the question: Why don’t men just stop behaving like this?
… See MoreSee Less

Why powerful men find it so difficult to avoid sexual misconduct.

Soul Wisdom Therapy Newsletter: How Do You Navigate Polar Opposite Beliefs In the Family?
… See MoreSee Less

Soul Wisdom Therapy Newsletter: How Do You Navigate Polar Opposite Beliefs In the Family?

Greetings! Welcome to the Soul Wisdom Therapy newsletter! How Do You Navigate Polar Opposite Beliefs in the Family? Although there are often disparate beliefs and values in families, the dynamic has

"The person I was looking for was the one I would need to become."
… See MoreSee Less

Be Your Own Guru

Be Your Own Guru