Anger is a normal human emotion and a reaction to having desires thwarted, feeling we have been wronged, witnessing injustice being done on a grander scale, or an escalation of frustration when we fall short of achieving success in any given endeavor. When things aren’t the way we think they SHOULD be, we may react angrily. The amygdala is the part of the brain that processes fear, triggers anger, and motivates us to behave in certain ways that we may end up regretting. It is an early warning system that tells us there is danger ahead and triggers the fight, flight or freeze response. It doesn’t understand the logic that the person who is driving slowly in front of you is likely not intentionally attempting to make you late to an important meeting. 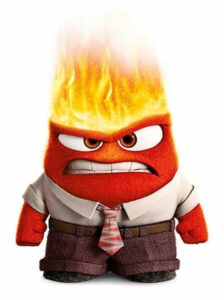 Remember the Disney Pixar movie Inside Out? Each character had a committee in their heads that included the emotions of Joy, Sadness, Fear, Disgust and Anger that would be triggered by the various scenarios which presented themselves in the life of a tween girl named Riley.  Riley was in upheaval when her family moved to a new environment and she was expected to adjust. Anger was a normal reaction to change that she hadn’t asked for.

Author, Tom Ziemann refers to that sometimes out of control emotion as his ‘anger dragon.’  He describes it in vivid detail in his book called Taming the Anger Dragon: From Pissed Off to Peaceful. He came to an understanding that the cumulative pain he experienced in childhood evolved into this expression of untamed emotions and destructive choices. It was when he learned to befriend the anger dragon rather than slaying it that he could keep it from burning down the village.

You may want to do an exercise in which you imagine your anger in physical form. Make it a full sensory experience. What does it look like, sound like, smell like, feel like and if you are willing, what does it taste like? Have a conversation with it, inquiring how it came to be, what it wants to say, how the two of you can work together rather than be at odds with each other. Journal about it so you can look back over time and remind yourself of the interaction when you forget.

A therapist friend, well versed in the dynamics of anger but who is anger avoidant in her own life, described to me an exercise in which she sat opposite another participant in a workshop, willing to interact with the emotion she had kept under wraps for so long. She explained, “We engaged in a conversation in which I had the opportunity to ask that aspect of myself who had not been permitted to speak very often, just what it wanted. What came out was that it wanted to be recognized as valid and not kept in the dark, drippy cave, festering underground, waiting to pounce on any unsuspecting passerby. It asked me to trust that it had a right to exist and could be used as a constructive force and not simply destructive. It said it was not only a weapon, but a useful tool. It reminded me that it was sometimes a catalyst for positive action. I agreed to find a way to co-exist with it.”

How can we use anger as a tool and not a weapon?

“It is wise to direct your anger towards problems — not people; to focus your energies on answers, not excuses.”   -William Arthur Ward

Trust yourself. At the root, at the core …
… See MoreSee Less

Life can only be understood backwards …
… See MoreSee Less

And while any physical activity — a walk, a swim, a bit of yoga — can give you an emotional boost, we wanted to create a short workout video specifically designed to make people happy. What would a “joy workout” look like?
… See MoreSee Less